The art of the trade, how the sausage gets made

We had grand plans today. A trip to Tokyo to a museum we hadn't seen yet, a restaurant I've had my eye on for a while, and possibly some shopping. We don't have much time before Blake leaves for his next TAD (temporarily assigned duty), so we're trying to knock some bucket list items before he goes.

But then yesterday was a bigger day than we anticipated and we didn't get to bed until late (11pm, so late, we're so old now) and our house was kind of messy and we decided to just stay home for the day. Our house is now cleaner, we had video chats with both sets of parents, I had time for a small nap (or at least a closed eyes in a dark room for a bit, not sure if I slept), and we took our dog and our weekend dog friend to the dog park. It was a good Saturday.

We figured that we'd at least get out of the house for dinner though and went to a Chinese/ramen restaurant just outside the gate of our housing detachment that we haven't been to in almost two years. We went twice shortly after moving in and then tend to forget about it as an option, even though it's the only restaurant within walking distance (while the one on our detachment is under reconstruction) and less than 15 minutes away.

Blake chose shrimp in chili sauce over rice, which wasn't too spicy and, therefore, pretty yummy. 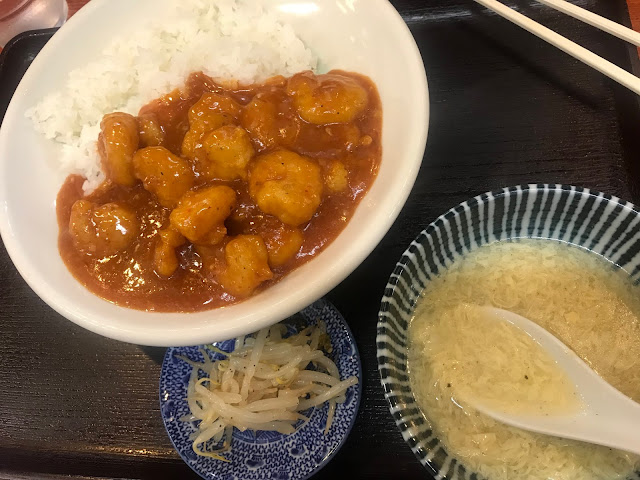 I chose . . . poorly. I don't know what I thought I was going to get, but it was some sort of scrambled eggs with crab meat in a tomato sauce of some kind and I only managed to eat about a third of it. 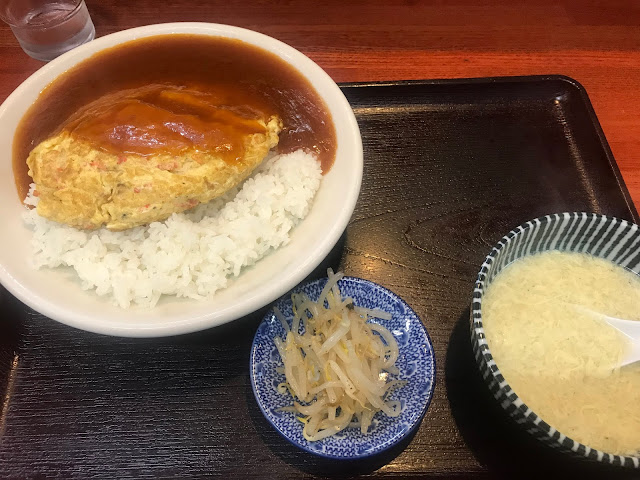 Fortunately, Blake didn't finish his shrimp, and the side dishes (bean sprouts, egg drop soup, and spring rolls) were sufficient and delicious. I usually order pretty well at all the different restaurants we've tried, even when I can't read the menu, but it's always a risk to try something new. Most of the food we've had in Japan has been even better than I expected (American Japanese restaurants are probably ruined for us now), but then sometimes, like tonight, it's weirder or less desirable than expected. And that's okay. That's life! There were a lot of other good looking things on that menu, so I'm just going to have to go back and try again.

Posted by AmandaStretch at 6:52 PM