I Have a Strong Stomach

Therefore, I've eaten a lot of strange things. I'm not a picky eater, and I'll try anything once. So, here are a few of my favorites (or at least favorite stories).

I know. It's sounds gross. (In case you don't know - A national dish of Scotland, composed of a forcemeat of the heart, liver and lungs of a sheep mixed with oatmeal, well seasoned and put into bags made from the paunch of the sheep. The haggis is then boiled for 2-3 hours and left to get cold. When required for use it is simmered again for about an hour and is traditionally served with mashed turnips, potatoes and whisky.) When my friends I got to Edinburgh, one of our first orders of business to try some of this stuff. We even found a pub that served it at a discounted rate to students and backpackers.

I loved it! I think it's because I'm part Scottish, and my last name is definitely Scottish. Good stuff!! 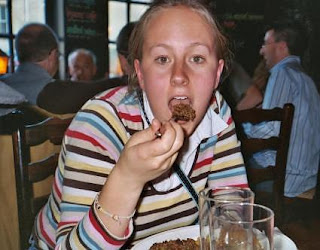 Sometimes during the summer, we were on our own for lunch. We knew how to make sandwiches and things, so Mom trusted us. This mostly wasn't a problem. One summer, I was probably 10, I guess we were feeling rather creative. We all liked cottage cheese and dill pickles and bread, so we decided to put them together. We used the chip-cut pickles, a couple spoonfuls of cottage cheese, and two slices of bread. In case you were wondering, it's gross. Really gross. Just for the record, lemon juice and sprinkles on cottage cheese don't taste very good either.

A delicacy in France, but we ate them at a restaurant called The Boondocks. It was right on the swamp and you could feed the raccoons out your window. They're good, kind of like slimy chicken.

In my 7th grade Texas History class we had a major project every semester. One of my classmates did a report on hunting and game (a wildly popular thing in the area). Her father, a hunter, brought in squirrel for the entire class to try. Try it I did. This tastes like chicken too, just a lot smaller.

If you're still thinking goldfish crackers after the rest of this post, you're way wrong. Every year in my high school, we had a spirit bowl where all the classes and teachers competed against each other. A male and female representative from each group would compete in each event while the entire school watched. Most of the events were normal things - tug of war, obstacle courses, etc. But then there's the Mystery Eating Contest. My junior year this was as simple as eating as many PBJs as you can while trying to down a gallon of milk. This was because the year before was goldfish. I was representing the sophomore class. The officiators rolled out a cart with a bowl of live, swimming goldfish. The objective - reach in, fish out little Goldy, and eat. 50 points if you just swallowed. 100 points if you chewed.

I couldn't let my class down (even though it's rigged and we were going to lose anyway), so I chewed.

I think I was the only contestant that didn't throw up by the end of the day.

It doesn't taste like chicken.
Posted by AmandaStretch at 2:31 AM 3 comments:

My Scapegoat Is Gone 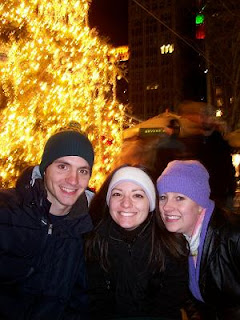 This is Cheeky. I blame this woman for everything, but lovingly so, and she knows it. Since she's the one who emailed me the job posting that ultimately moved me across the country to start a whole new life, it's all her fault. We first met online, as part of a Utah-based online theatre community and message boards, and probably knew each other for several months before meeting in person. It was a week or two after I'd come home from a study abroad in London, and our theatre community had organized our monthly lunch. I was working at the BYU library at the time, and didn't have a car. Cheeky came to my rescue and arranged to pick me up outside the Wilkinson Center. We hit it off immediately. This was July 2004.

In July 2005, Cheeky moved out to Maryland, found a job, and we kept in touch. She loved living in DC, and it became her mission to convert others to the East Coast.

In July 2006, I followed her out here. It ultimately was the job I moved for, as I probably wouldn't have just up and crossed the country without it. I'm so happy that I did. We probably only got to see each other once or twice a month, but I knew that I had at least one friend on the East Coast when I was missing everyone back home. We even road-tripped together to NYC in December, which is when this picture was taken.

In July 2007, Cheeky will be marrying Magic, the young man in the aforementioned picture. I'm so happy for them, even if it means they'll be living in Texas while he attends law school. She loaded up and left yesterday, and was in Knoxville by the time I called to see how that was going. (Thanks Pezao for helping her! That really meant a lot.)

Cheeky - I love you! Thank you for everything! Hopefully I'll get to come visit you soon - July 2008, do you think?

Posted by AmandaStretch at 11:29 PM 4 comments:

Though I'm a librarian now, I have a BA in Theatre. I still do theatre whenever I can, whether that be performing, or a newer love - choreographing.

I'm a choreographing a show this summer, and when I'm creating a dance I usually have at least one moment in my rehearsal that I call my "Moment of Genius". It's that moment where I know exactly what I want, how I want it to look, and how it's going to fit. I was so excited the other night to have my Moment of Genius, and I was explaining it to my cast. (This was our first rehearsal together.)

My eyes lit up, I got totally excited and said "Yes! Moment of Genius! This is going to be awesome!" Then, one of my cast members said something that distracted us for a second.

I should mention at this point that I'm a Mormon, and the group I'm working with is predominantly Catholic. We're even rehearsing in a Catholic church, and I was standing not 20 feet from a crucifix.

Hence the following embarassment. I had to get us all back on track, and was so excited, which means I was talking fast.

Awesome. Go me.
Posted by AmandaStretch at 11:10 PM No comments:

This is me. It's time I have a public place to share stories, update loved ones on my life, rant, rave, and otherwise share my thoughts. I might even be funny once in a while. For those of you just tuning in on my life, I'm a (in no particular order) single, female, Mormon librarian living in Northern Virginia (just outside of Washington DC). Anything else you need to know will come. Mostly I just hate writing bios. :) Feel free to comment and add to the discussion.

Welcome to me!
Posted by AmandaStretch at 12:57 AM 1 comment: