In New York, you can be a new man 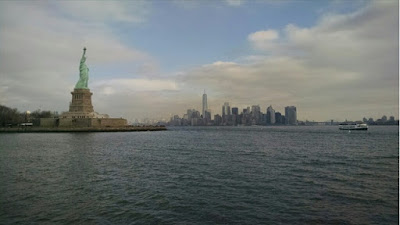 Blake and I knew that December 2015 was going to be insane. We had a very quiet Thanksgiving to prepare for that, and I'm quite glad.

The first Friday in December, Blake and I threw our congregation's Christmas party. We were asked in October to head that up, and we accepted. Our goal was to keep it super simple, since it was just us, so we made it a chili cook off. Main course - done. We had more than enough participants, the missionaries judged, and it was a hit. For decorations, we had families bring in a nativity for the center of the tables, which we'd covered in butcher paper and crayons. On one side of the gym, we had a snowflake station - people were invited to cut out a snowflake from a coffee filter and then write a favorite Christmas tradition or memory on it before hanging it on the wall. For a take home party favor, we had a station to put together a Christmas potpourri bag with citrus and spices that you boil in water on the stove for delicious fragrances. And yes, it was make your own, since Blake and I didn't have time to make 50 them ourselves, but that was a hit too. For dessert, we bought ten dozen donuts from that local donut shop that we love that does daily freebies. So good. We also had a Santa and a photo booth, which was saved by our bishop's wife who noticed the spelling error in the banner before the party. 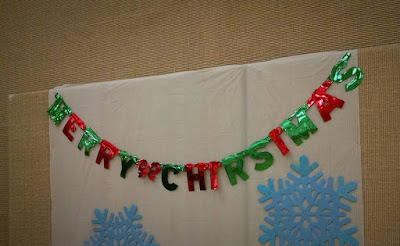 Thanks to everyone who brought something, everyone who helped set up the night before or take down after, and everyone who came to the thing, it was a great, low key success.

Then, starting Saturday morning, I drove to and from Baltimore every day for three days for librarian training from the International Baccalaureate, of which my school is a part. It was a lot of driving, but it was a really good training. On Saturday, I made it back in time to see at least the last part of a Christmas boat parade with Blake. Sunday I made it back to take Malcolm to a friend's house for a few days and then decorate our apartment for Christmas, as is traditionally done on the first Sunday in December in our family.

Monday, Blake came with me to my last day in Baltimore and hung out in the hotel for a few hours so that we could drive to New York City that afternoon. My dad was going to be there for work for 24 hours and he casually mentioned how fun it would be to see us. Fortunately for him, I had already scheduled to take that Tuesday off work, so why not?

We all made it to Dad's hotel around the same time, a swanky place in Chelsea, and, PS, I drove in and out of Manhattan and survived. The valet parked our car, we settled in for a minute, and then started our adventure! Dad had a hankering for a New York hot dog, so we schlepped up to my favorite hot dog place - Gray's Papaya - for dinner. We had taken the subway up, but we walked back so that we could enjoy the sights of New York at night during Christmas time. We showed Dad the Manhattan LDS temple and I showed both of them the Christmas tree at Rockefeller Center.


While we were there, we met a retired NBA player and his wife, whose name we have now forgotten, but he played for the Phoenix Suns. However, our more exciting celebrity sighting on this trip was the Target dog, Bullseye, who was staying the same hotel as we were and we saw her twice. We never got a picture with her, but we should have.

After our stroll, Dad had a reception to attend, so Blake and I scoped out Chelsea Market for breakfast options and treated ourselves to gelato, before meeting back up at the hotel to hang out for the rest of the night. As much as I have appreciate staying with friends in New Jersey and Brooklyn on various NYC trips, it's really nice to have a hotel in Manhattan to crash in, which I hadn't done since a previous NYC business trip with Dad during college. Thanks Dad and the companies you work with!
Tuesday morning, we all had breakfast at Chelsea Market before saying goodbye to Dad on his way to his meetings. Blake and I headed down to Battery Park for a cruise to visit the Statue of Liberty and Ellis Island, which Blake had never visited. 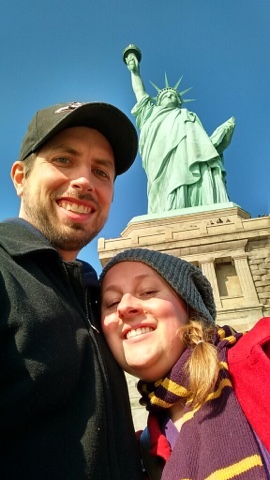 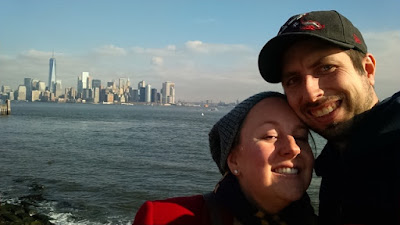 We also made stops at the Charging Bull at Wall Street and paid our respects to Alexander Hamilton at Trinity Church. 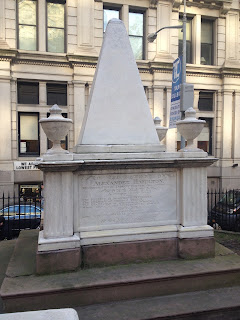 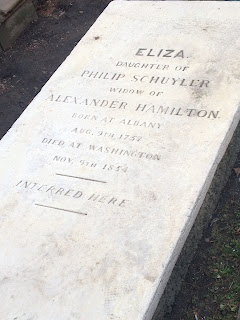 For lunch, we went to a pizza place, Picasso Pizza, where I had a slice with pasta on it. Can't eat like that everyday, but it was fun to try! Not wanting to spend much money, but having plenty of time on our hands, we walked up the island along the Hudson River Greenway. It was a lovely day and we like walks.

We hoped to see the musical Hamilton that evening, but the only possible way to get tickets right now is through the Ham4Ham lottery - front row tickets for a Hamilton ($10). We both tossed our name in, but it was not to be this time. So, we called it a night, walked back to our hotel and started the long drive home. 24 hours in NYC isn't much, but we had a great time. 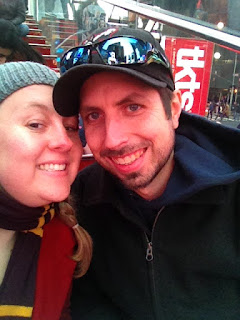 Not done with adventures yet, on Wednesday morning we got back in the car to drive to Richmond, Virginia, so that Blake could swear into the Virginia Bar Association. He's now a fully licensed lawyer and member of the bar! So proud of him and all of his hard work. 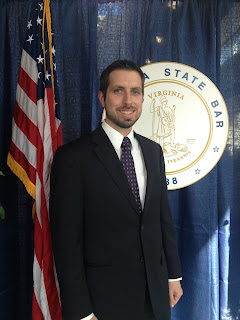 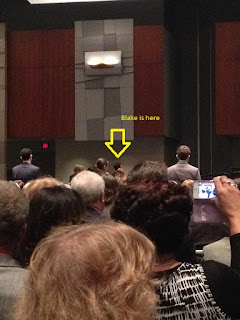 On our way back home, we got word that we'd be driving to and from Virginia Beach that upcoming Monday, which I'll blog about at some future time. For this trip, Blake and I drove back north, went to dinner, and then picked up Malcolm. The friend he stayed with has four other dogs, so it's possible Malcolm has more fun there than at our house. He's still happy to see us when we pick him up.

Posted by AmandaStretch at 5:01 AM 4 comments: