I am a paleontologist!

We have a standing rule in our new little family that if we're driving somewhere and see a sign for some crazy roadside attraction, such as "World's Biggest Ball of Yarn!", and we have time, we can stop and check it out. Thanks to websites like Roadside America and our own quirky knowledge of things, we can actually plan trips to the offbeat and bizarre. 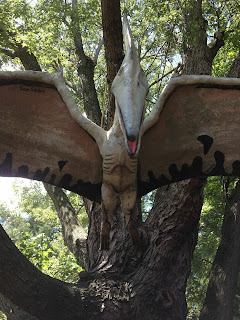 This was the case with Dinosaur Land. 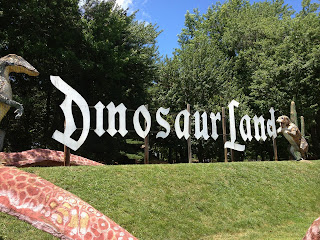 Fifty years ago, someone decided to build and paint a bunch of fiberglass dinosaurs. They are not to scale. They are not entirely accurate physically. They are certainly not organized in any way. They are just there. And for six dollars a pop, you can take a stroll through kitschy history.


It was completely worth it. 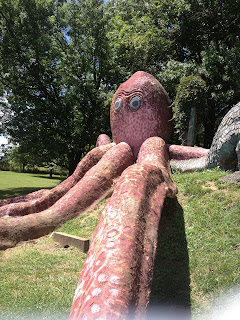 We have no idea how big this octopus actually is. Or why it's in a dinosaur park. While we were driving to Dinosaur Land, I must have been distracted or just too excited to focus, because I was having a hard time focusing on things that were rather obvious, and this inattention to detail came out a few times.

Me: That makes more sense.

It's probably a good thing I wasn't driving.

Our stop through history was on our way to a campsite in West Virginia, where we stayed the night. I'd been given a tent as a birthday present last year and we used it for a fun indoor date then, but this was its inaugural trip outdoors. 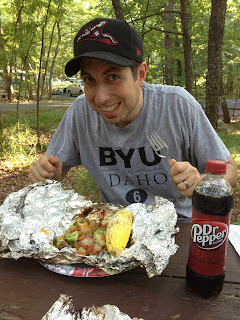 We grilled pork chops and corn. 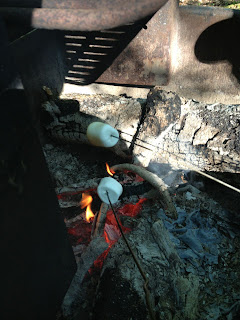 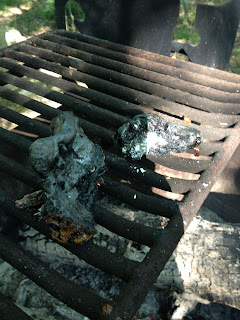 Discovered what marshmallows do if dropped in a fire. SCIENCE! 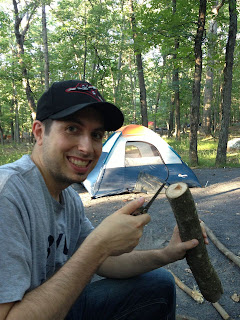 Cut up firewood with a pocketknife.

We also kicked back and read, played some games, and, after it was dark, I read a chapter of The Graveyard Book to Blake. In true first world problem fashion, we discovered our air mattress was a little too big for our wee tent. It stretched the seams and took us twenty minutes to zip once we were inside, but we managed and it was fairly comfortable. We'll just have to invest in some foam pads for next time. 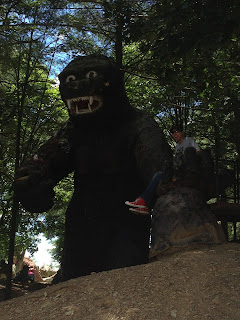 Posted by AmandaStretch at 7:22 AM 3 comments:

The World Spins Madly On

When we were little, my siblings and I begged for a dog, as so many children do. We got all the typical reasons why we couldn't - Dad's allergic, we don't think you're ready, we can't have dogs in our apartment, etc. Finally, the summer of 1997, while living in Beaumont, TX, and finally in a house instead of an apartment, our parents finally agreed to a dog and we started looking. An ad in the local newspaper for miniature beagle puppies caught our eye and we gave the guy a call. There were two left in the litter and while Brotherface was sure we wanted the one with the saddle, Sisterpants and I said we wanted the one with more spots, and the family consented. When we got to the breeder's home, the one we'd requested was climbing through the chain link fence to greet us. He was just that excited to join our family and we couldn't wait to take him home when he was weaned a few weeks later.


Mom suggested we name him Logan, after Logan, Utah, and it stuck. He was perfect. 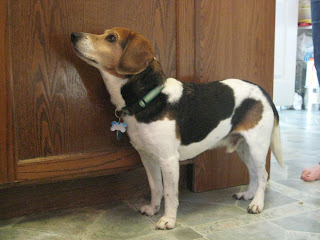 We should have taken it as a sign that he was going to be our little escape artist when he greeted us by climbing out of the chain link fence. Our chain link fence at home was no match for him and we had to keep a careful eye on him, because he'd bolt at any opportunity. He continued to have a penchant for exploring even when he was bigger and there was a door ajar. Most of the time, he'd end up at the exact same friend's house, but sometimes he was taken to a vet or even the pound once.

The humor columnist Dave Barry once described beagles was "noses with four feet attached." And that was our Logan. He sniffed around the yard so much, in the same pattern for the fourteen years my parents have lived in their house, that the grass is worn down. When it snowed, the snow melted along his trail faster, since he'd still walk it everyday. Our yard was carefully guarded from all manner of foul beasts - birds and squirrels were no match for his bark; he even "treed" an opossum once. Of course, Logan LOVED walks and hikes and we loved having him along.

Logan loved snacks. If you were eating or preparing food, Logan wasn't far away.


Logan was a champion sleeper. If he wasn't snuggled on a human (he used to be little enough to climb up the couch and nap on Dad's shoulder), he could also be found under bed covers.

He loved helping with the dishes. Sure, this could trained away, but we never did.

His favorite toy was his pal, a dog puppet that used to belong to Brotherface. That thing was disgusting and torn to shreds and made for epic games of tug-of-war often followed by snuggling it to sleep. 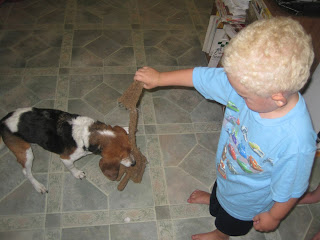 Of course, Logan's favorite thing was his people. He was incredibly friendly to everyone, but he made sure you knew he was grateful to see his favorite people, especially his family, whether you'd been gone for an hour or six months and gave you lots of excited howls and hugs and love. 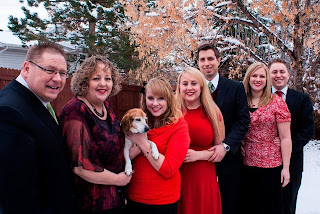 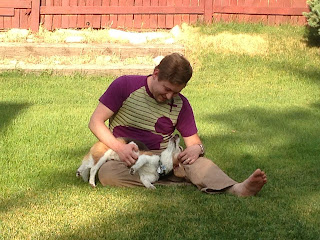 We loved Logan back. And we loved him back enough to know that, earlier this week, it was time to say goodbye. He was 84 in dog years and had lived very full and happy life. Thanks to FaceTime and G+ Hangouts, I got to say goodbye in as person as possible, though what I wouldn't have given for just one more Logan cuddle. 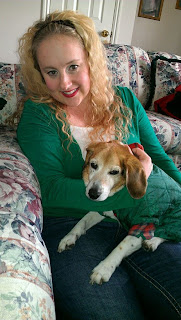 Logan was the most wonderful dog, and I'm so grateful for the time I had with him. Thank you, Logan, for being part of my life. 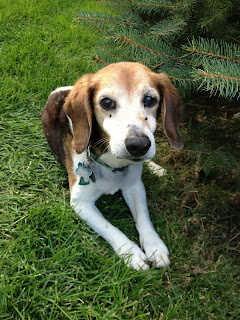 Posted by AmandaStretch at 6:36 AM 2 comments:

Got mud, yeah, we got mud

If you were to dump me in a huge mud pit right now, I would not be happy. One, I'd still have to get home and I'm sure my fellow Metro riders would be none too pleased. Two, I'm wearing the same shoes I wore for my wedding. I'd really like to keep them nice.

But if you give me a chance to get ready, I'd happily jump into a mud pit. Last Saturday, Blake and I did just that. In fact, we jumped and ran and walked into several mud pits.

The week Blake and I got engaged, I did a Tough Mudder with some friends from church. Sure, I had to walk a lot of it and skipped a few obstacles because my ankles just aren't awesome, but I did it and I still feel like a total rockstar for it. 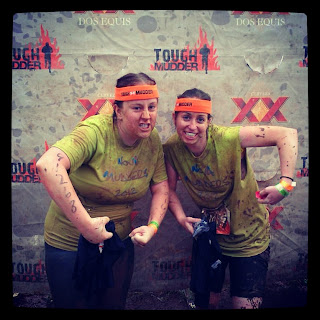 Unfortunately, Blake didn't get to do it with us because the event had sold out before we'd even met. He did support me though and he's a rockstar for that. 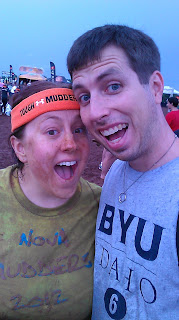 So this last Saturday, we finally got to do a mud run together! This time it was the Armageddon Ambush, a 5K.

And it was awesome.

We dressed up a little - we bought matching white t-shirts (these shirts were clean when we started, folks) and put a bow tie on his shirt and I wore a makeshift veil on my head. On the back of our shirts were Mr. and Mrs. They were cheap costumes to put together and ultimately destroy. We got several congratulations along the route and really enjoyed playing up our newlyweddedness. 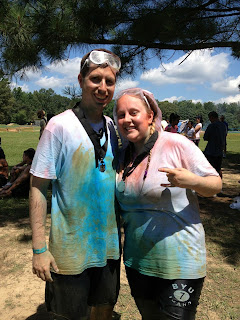 I did say we destroyed our shirts though right, because we totally did. 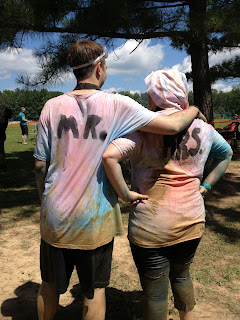 The course was a modified motocross race course, so we were up and down a lot of little hills or moguls or whatever dirt bikers call them. We also climbed up and down cargo nets, jumped over a burning log, climbed over and under walls and logs, and slogged through a lot of mud. We ran a little, but mostly walked so I didn't roll an ankle.
Every so often, we were ambushed by people hurling colored chalk on us, including someone with a fire extinguisher full of blue powder. Between the water and sweat, we got dyed fun colors pretty fast. In fact, parts of me are still blue despite multiple showers and scrubs. I also still have a couple of wicked bruises. 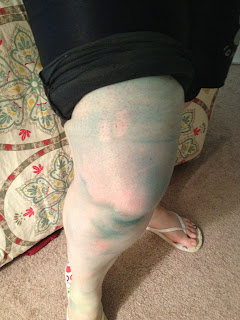 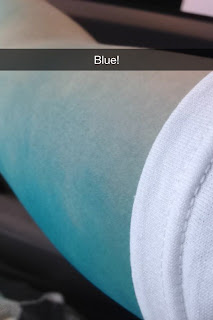 Our favorite obstacle was climbing a cargo net attached to two shipping containers stacked on top of each other. On the other side was a water slide into a big, muddy water pool you had to swim out of. Blake decided to follow me, rather than climb side by side, so when the other girl and I were halfway up, the volunteer at the top told the one at the bottom to not send anyone else up. After a bit of confusion as to whether those of us on the net should finish or go back down, we decided to finish. The other girl reached the top first and the volunteer helped her get on top of the containers. I then watched them both go down the slide while I hung at the top of this pretty tall net all by myself. While I probably could have gotten to the top alone, I really wanted a spotter and I communicated with the volunteer at the bottom that the other guy had disappeared and I could use some help. Before he could even finish the question of who wanted to go up and help, Blake was a third of the way up the net and the crowd behind us yelled "Mr!" He scrambled to the top, helped me up, we kissed, the crowd cheered, and we went down the slide together.

Overall, I liked the length of this versus the Tough Mudder, particularly because of my aforementioned ankles. The rest of the day we were tired, but not totally wiped out, because we accomplished something difficult. The obstacles were mostly overs rather than a mix of overs and unders, but that's okay. We had a really good time and plan to do another one soon!