I go out walkin' after midnight

Now that Malcolm is free from quarantine and allowed to go off base, we've been able to change it up on our walks! And change it up we have!

Saturday morning, we went on our first family grocery walk to a Japanese grocery store. We did that most weeks in DC after getting Malcolm, so it was great to get back out there! This, however, was probably our best grocery walk to date, because we first stopped at Zushi Beach and got an amazing view of Mount Fuji!


It was a spectacular site and I am looking forward to many more walks to Zushi Beach, especially in warmer weather. The sky won't always be this clear, but it will be amazing when it is! We actually had to walk a little down the beach to get Fuji-san to appear from behind the cliffs and it was worth it.

On our way home, we learned that the sign for "Can I pet your dog?" is indeed international, even if we don't understand the words. Malcolm was distracted by the fragrant fish market we were stopped near, but I'm sure he still enjoyed the attention.

Tuesday morning, our family walk took us up in the Ikego campground. It's just outside the base gate, so we've been looking forward to this for awhile. There are beautiful bluffs and bamboo forests and we are excited to explore it more. This time we discovered some yagura or hill tombs carved throughout the area 500-900 years ago. 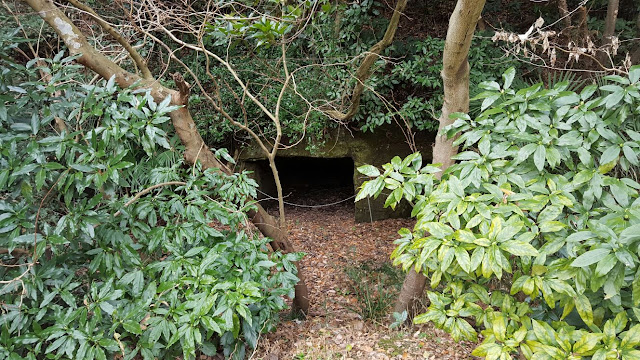 Round trip for both of these walks is only about 4 miles, so we can definitely do them more!

There goes the baker with his tray like always

Two weeks ago, on the first Saturday in December, I was sitting on the edge of a planter, eating some noodles and chicken with disposable chopsticks and watching several other people (mostly families) sitting wherever they could to eat their dinner when I had the thought "This is my reality now. I live in Japan and do things like this." Blake was on a quick trip to Arizona for his grandfather's funeral (Grandpa was almost 93 and had a rich, long life, but had been struggling with his mental and physical health for a little while), so I was on the only American I could see. I had gone to this street to check out a Christmas bazaar. It turned out to only be a few booths on either side of a street corner across from a train station, but I still enjoyed it. I found a homemade ornament and had a chocolate dipped banana in addition to the noodles. 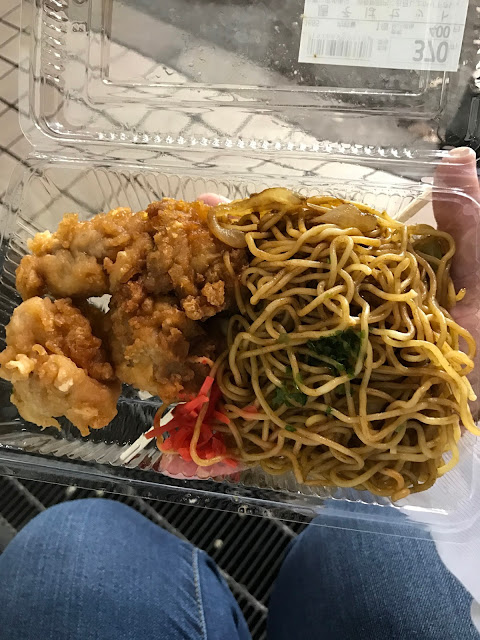 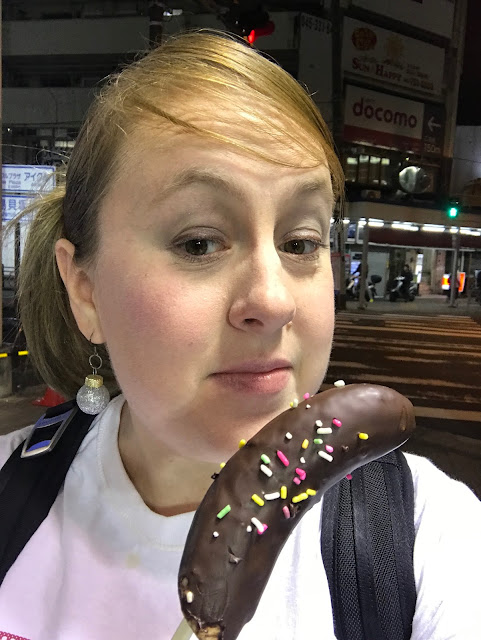 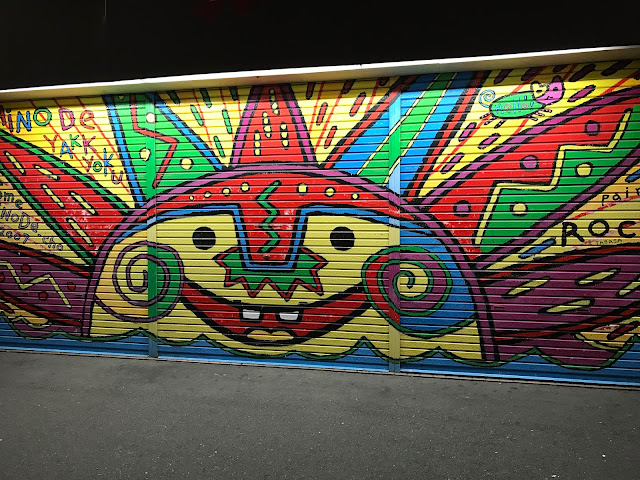 I spent the rest of the evening at a party of Blake's coworkers, without Blake. This is definitely outside of my comfort zone, but they're good people and I actually had a lot of fun. Instead of gingerbread houses while watching Christmas movies, we made an aircraft carrier while watching Top Gun.

Because this is my reality now. I live in Japan and do things like this.


This place - our apartment, the base, Japan - is feeling more and more like home everyday. What strikes me as most interesting lately is how much my morning walk with Malcolm feels like The Truman Show, where every thing on his morning commute to work can be timed to the second. On the days Blake doesn't take Malcolm running before work, we all leave the apartment together for Blake to catch the shuttle to main base. We say hi to some of the others who get on at the same stop and within a few minutes we're all off. I tend to take the same route most mornings and we frequently see the same few middle schoolers on their way to their bus, then the guy who drives a big black van, then some school buses, and eventually one of my friends from church on her way to work. Obviously, there is some variation, but on the rare occasion I'm a few minutes late, it feels off when the buses or other people pass me earlier than usual.

It was especially amusing to me this morning when a middle schooler actually called me out on our routine! As he was walking out of his house, he said "You always take this route!" Sure do! We chuckled and I explained that we walk my husband to the bus and then start our walk, so yeah, see you next week!

Malcolm did get out of quarantine last week though, so starting this weekend (when we finally have time together) we can take him on walks off base! We're looking forward to resurrecting our grocery walks tomorrow, and we hope the sky is clear enough for a view of Fuji-san before we return home.

We are also enjoying the Christmas decorations we have put up. It's our first Christmas just us, so we're having fun deciding how to spend it. For example, our tree this year is only decorated with ornaments that mean something to both of us (and a few snowflakes I received from my visiting teacher this week - a sister from church assigned to visit me each month, since our leadership has day jobs and can't be expected to reach out to everyone all the time). Per tradition, we had the First Presidency Christmas Devotional on whilst we decorated, just a week later than usual since it was live at 10am on a Monday whilst Blake was at work. We've also helped throw the church Christmas party again this year, luckily at the party room in our own apartment tower, and I sang at a fundraiser concert put on by the Japanese and American legal community.


Our goal is to have our home fully decorated and set up by the new year, and we're well on our way!
Posted by AmandaStretch at 4:24 PM 2 comments: