Six years ago in London, I saw A Dog in the Manger, a Spanish Golden age play by Lope De Vega. The synopsis, as I wrote in my theatre journal that night is this:

It's madness. There are schemings and secret meetings and lies and it's all very fast-paced because this is a comedy and finally in one scene, Teodoro drops to his knees and shouts. "I HAVE NO IDEA WHAT'S GOING ON!!"

Ever since I saw this show, whenever I'm completely confused by something, I shout (at least in my head) the same thing. It looks a lot like this: 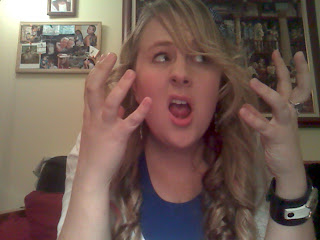 I'd say it out loud more often, except that it's more fun when you're quoting something for other people to have seen the same thing.

Usually, I say/think it in a humorously confusing situation, like today's chat with Mr. T.

It's a way of diffusing whatever it is that's gotten me so lost.

So, now, if you ever hear me say it, you know where it comes from.

Anything you quote or re-enact even if no one else knows what you're referencing?
Posted by AmandaStretch at 11:46 AM

Whenever someone says, "I have a question" I always reply immediately by saying "12." "12" is then answer to "what is the purpose of man's existence?" in Neil Simon's play "Fools."

I said it to my professor yesterday and it slightly confused him.

Sometimes if someone asks me a question that I want to reply with a "yes" or a "good to go" I say in an extremely tense voice "OKAY TO GO!! I'M OKAY TO GO!!" which is a line from Contact, my favorite movie. Only my sisters understand me, and we all giggle profusely.

Ashley - I LOVE that movie! I hereby promise to laugh whenever you say it from now on!