You were the best of Montmartre street life

What an amazing trip! J'adore Paris! I am so grateful that I was able to make this trip to see my grandparents, and that they were adventurous enough follow me to and around Paris. Thank you Grandma and Grandpa!

When I arrived in London, I spent that Sunday just being with my grandparents and desperately trying to stay awake to defeat the jet lag. I'd been traveling for about 24 hours, so that was a bit tricky. I made it though, and they were very happy to see me.

Monday, Christmas Eve, we took the Eurostar to Paris! (After, of course, a quick side trip to find Platform 9 3/4.) 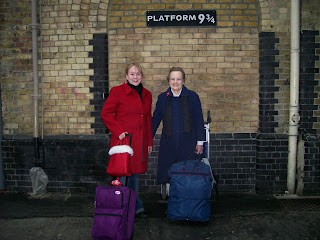 It took me a few minutes to convince my grandfather that I could find our way on the metro and that we'd be able to make it to our hotel, but I was right and he was trusting. Also fortuitous was that I knew just enough French to communicate with various people, most of whom were probably very forgiving.

Since Christmas Eve dinner is the big meal for the French, our concierge set us up with a restaurant. It was delicious, though expensive, and the service was quite friendly. I even had foie gras!Following dinner, we enjoyed a night view of the Sacré-Coeur Basilica from the Place du Tertre and paid way too much for a couple of roses. 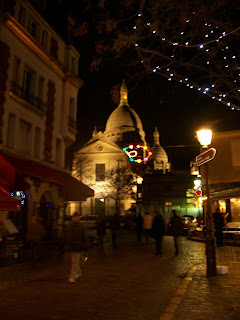 We then headed to Notre Dame, with the intentions of enjoying Le Messe de Minuit (Midnight Mass). Unfortunately, after standing in a mob for several minutes, we discovered we should have been there hours earlier to get a seat. We enjoyed the music of whatever service was going on at 11:30 PM, and then called it a day. 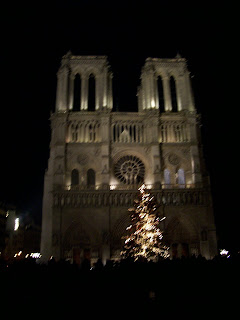 Christmas morning, we slept in a little and then opened the few presents we had. Then, we found the one open grocery store to pick up sandwiches for lunch at the base of St. Augustin Cathedral. 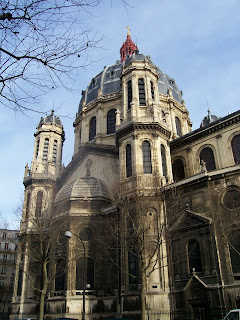 Our afternoon was spent with me leading us on a walking tour of Montmartre, trusty guidebook in hand. We found the original location for the Chat Noir, several former homes of famous residents (i.e. Van Gogh and Renoir), a couple original moulins (windmills), and Moulin Rouge itself. We also saw several sites from one of my favorite movies, like the carousel at the base of Sacré-Coeur and the Cafe du 2 Moulins. 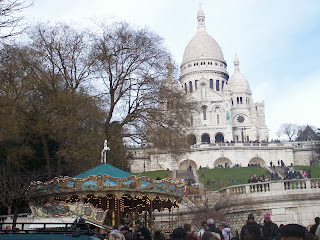 I was delighted, and we had a great time wandering around this very artistic part of the city. Also, I was quite flattered by the fact that the friend of the cashier at the souvenir shop we visited could not keep his eyes off me, and I'm fairly sure they were talking about me too. Sadly, with grandparents in tow, I could do nothing but bat my eyelashes, and wave as we walked away. Grandma said to not let that stop me in the future. 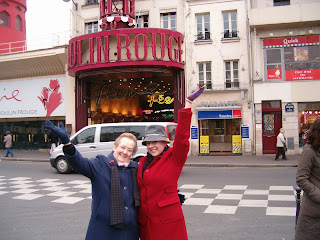 We capped the day off by seeing the most notorious landmarks of Paris - the Eiffel Tower. It was a-MAZ-ing. Absolutely stunning. Unfortunately, it was a weird time of day that was not optimal for viewing the city or taking pictures, so we decided to hold off on going up until the next day. 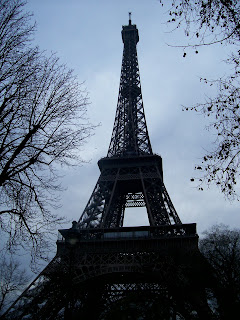 Our dinner was lovely, and seeing the Eiffel Tower at night afterwards was awesome. The only sad thing about Christmas in Paris was not having my parents or siblings around. Due to everyone else in the world using international calling cards, I was also unable to talk to them. It's a good thing they know I love them. 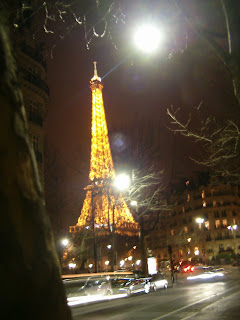 My final thought: Paris at Christmas! Can you imagine? No, I don't suppose you can . . .
Posted by AmandaStretch at 11:07 AM

How fun! You look wonderful.

I want to go to Paris some day. :P

Konfusion with a K said...

AH! I love that movie! It's one of my favorites! I actually just watched it a couple nights ago :)

I'm so glad that you had a wonderful time in Paris. What a great trip!!!