London calling, yes, I was there, too

Since I've lived in London (3.5 years ago for study abroad), I'd pretty much done everything. So this trip was dedicated to the more obscure things I hadn't seen before. 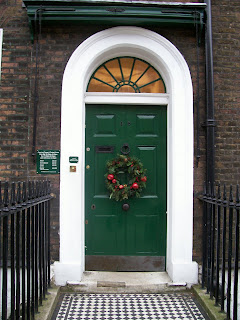 My first stop was the Charles Dickens House Museum. It was interesting to learn more about his life. Part of the house was set up as it would have been at Christmas, which was lovely. On my way back to the Tube, my beautiful, new red coat brushed up against a newly painted post! Luckily, the "artist" was there, so he took me inside his cafe and helped me clean up as best we could with some paint thinner. Also fortunate, was that it was all on the inside of my coat. He offered me a soda and a seat, and was extremely apologetic. I declined the latter, but one orange Fanta later I was on my way.

Seeing this made me chuckle quite a bit: 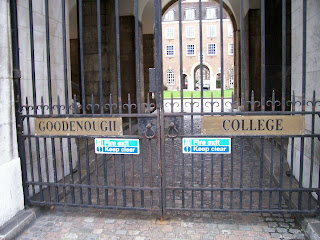 I guess I lied about my trip being for more obscure things, because my next destination was Covent Garden, one of my favorite places in London. I did a bit of shopping and lunching. Some random artist did a charcoal sketch of me, and it's pretty neat. I tipped him, and enjoyed a few minutes of conversation, before traipsing to Leicester Square and visiting the National Portrait Gallery, which I missed last time. 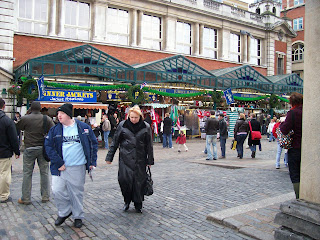 Then, it was time for a rest and reminiscing in Trafalgar Square. 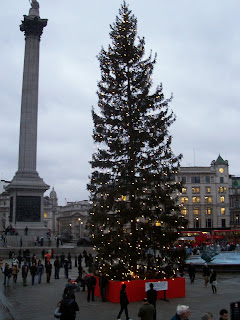 I was facing a conundrum at this point. I had some time to kill and wasn't sure what to do with it. So I took a picture to demonstrate this moment. 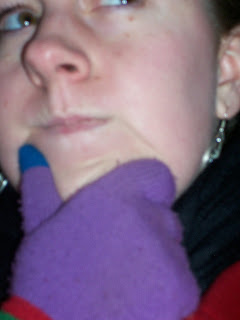 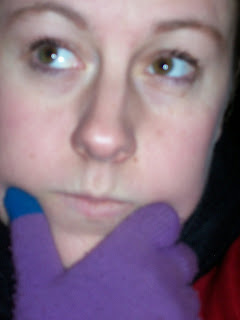 Finally decided, I was off to dinner at Wagamama's on High Street Kensington, mere blocks away from my old flat. The restaurant was just as good as I remembered it, even if I was enjoying it by myself.

After dinner, as I was exiting the South Kensington tube stop, I heard a choir of handbells and had the next series of thoughts:

"Hmm. The choir is all matchy matchy. Interesting."

Sure enough, it was a choir of LDS missionaries, which was just really cool. There were about 8 playing, and another several milling about talking to anyone they could. I walked up and surprised one of the elders by saying "This one of the most original ways I've seen of getting street contacts ever." Elder Merritt from Idaho was pleased to have an American Mormon to talk to for a few minutes, and it was certainly fun for me.

I spent the evening enjoying an exhibit about the golden age of couture at the Victoria & Albert Museum. The clothes were exquisite, and I learned a lot about the history of fashion. 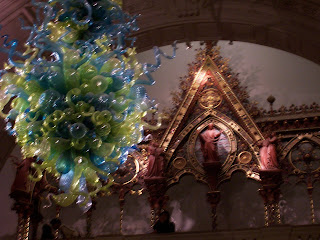 It was a great day, and I was very glad to be back.
Posted by AmandaStretch at 1:41 PM

Words cannot express the screaming jealousy inside my head that you got to see that exhibit at the V and A. SCREAMING... *wink*