After a two year absence, some weight gain, and at least two major ankle sprains, I have once again started taking a dance class. I did take one ballet class a few months ago, but it is right after that last sprain, and right before my life got really busy (as if I'm ever not), so that didn't last long.

Today, I started an Intermediate Modern class at a studio in Maryland. I've trained in a lot of different styles, but modern is my favorite. I feel it brings me the most connection between body and soul and allows me to express that connection in ways that other dances cannot. Despite what some think, it isn't all about pretending to be a tree or being the water. In fact, that rarely, if ever, happens. It's about how the position of your pelvis creates the room for your feet to move off the floor. It's the connection from the top of your spine to the bottom of your toes. It's breathing and feeling the movement, just as much as thinking about it.

I used to be really good at it, or at least a lot more confident. I've been doing modern for more than eight years now, dancing all the way through high school and college. Unfortunately, dancing as a working adult is lot harder than fitting .5 credits into a semester's schedule. I was on a company for the first year post-college, and there were some really hard technique classes, but I was still fresh on my technique and did fairly well.

Then I moved here. I still dance a little, but teaching dance is not the same as actually dancing. You might do the sequence once, but then you spend the rest of the time critiquing others and showing bits and pieces. So, this morning, I was really out of shape. I didn't have the same retention for sequences I used to, and since we weren't all new, the instructor didn't take time to break everything down for me. Of course, I don't blame her for that, and I know that most of the other students have been working with her for much longer than two hours and have done many of these sequences before.

I messed up a lot. My right ankle (the one I have injured the most) hurt so bad about 90 minutes into the class. I was even bleeding in two spots on my leg; I think I scraped them on my toenail or something. I felt judged by the others in the room that were doing much better. I almost cried out of frustration, hating myself for not doing this sooner.

I also kept up pretty well. Even though I was hardly perfect, I didn't look like a total hack (except maybe in that last sequence). I realized that the other dancers were likely not judging me, because they were worried too much about what they needed to fix. I was also reminded that they've all been the new kid before, so they understand. I certainly know that I'll empathize better when I'm no longer the newbie. I also received a couple of compliments from the instructor, once after she fixed my positioning on a movement and another when I did something well all on my own, and that felt really good.

It felt really good just to be dancing again, full out and with as much heart as I could muster, or spare when I wasn't cursing my lack of talent. I'm not going to give up, because I know it's going to be that much easier next week.

I did buy a new ankle wrap (one that's more flexible than the brace I wear running) and some tennis balls (great home massagers) on the way home. I have a feeling tomorrow I'm going to rediscover some other aches and pains when I try to get out of bed and can't move. Ibuprofen, here I come! 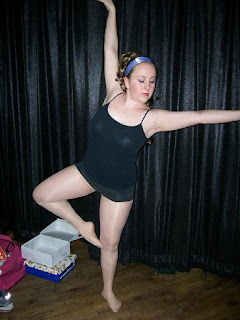 Posted by AmandaStretch at 11:06 AM

Hopefully your ankles get used to it :)

They darn well better. I need to dig out my therapy bands again too. Mean, stupid ankles.