When I checked the weather forecast this morning, I saw a possibility of rain turning to snow with an accumulation of 1-3 inches. Having already been here for one previous winter and having only one snowy day (with minimal accumulation), my response was definitely one of "I'll believe it when I see it." It definitely snows in Japan, which we've seen in Nagano and Hokkaido, but just not frequently in the Tokyo area.

Well, now I've seen it and I definitely believe it! And it is significantly more than 1-3 inches! Sadly, Blake is back in Arizona for a family funeral (his paternal grandmother passed away), so he's missing it completely! 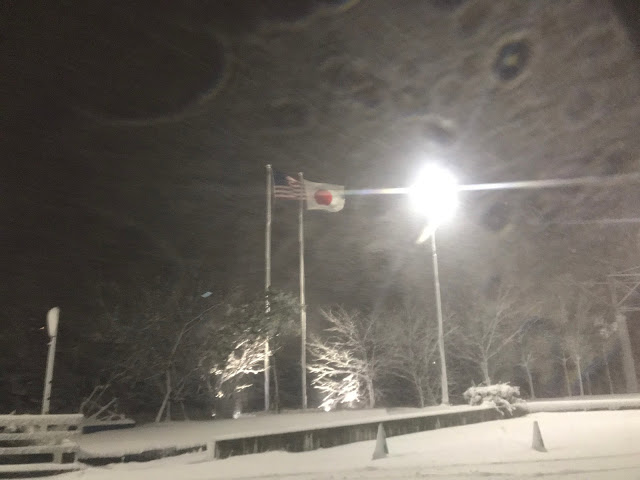 It started snowing a little bit in the morning, flurries with big, fat flakes. It started accumulating in the mid-afternoon and there was about an inch when I left for main base, where it wasn't sticking at all, just snowy, wet, and cold. 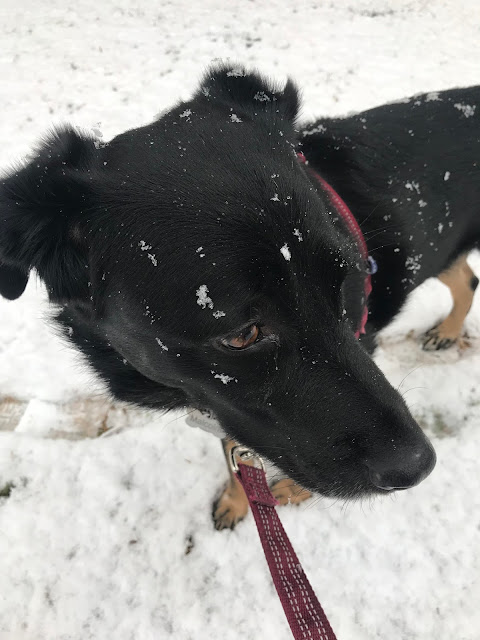 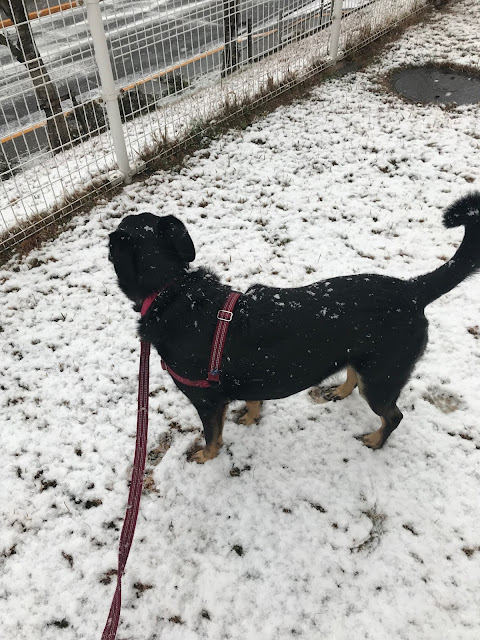 About two hours later though, once the Officers Club was closing early and our command function (a Hail and Farewell) was ending by default, it was building up there too. Several of us piled in a van and got a ride to the train station, which was much appreciated. The trains were running, thankfully, though with significant delays. I was traveling with a couple of neighbors from our command, so we commiserated as we shivered on the train platform. Eventually, we made it to our station and trudged through the snow that was easily 3-4 inches deep up to our building. 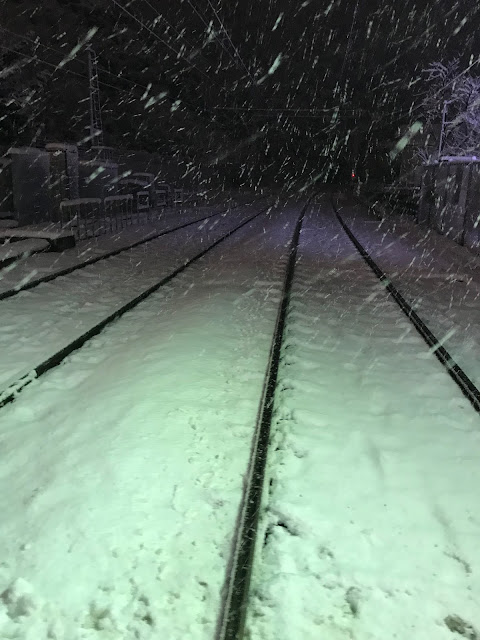 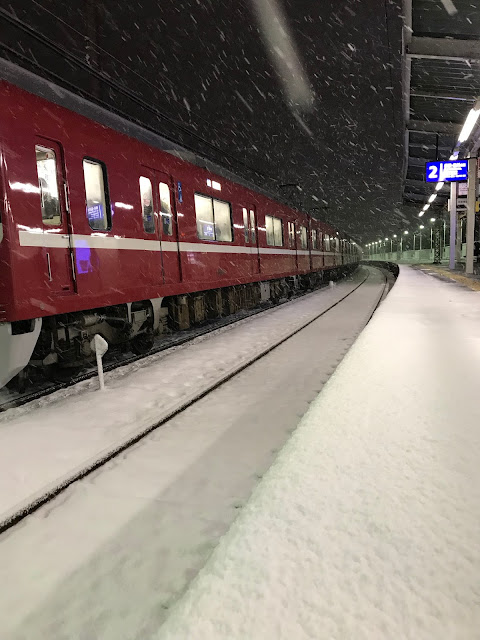 Immediately upon returning, I changed into slightly more practical clothes for the weather (waterproof pants instead of a long tunic and leggings) and Malcolm and I met up with our next door neighbor and their dog, Georgia, for a romp in the snow! 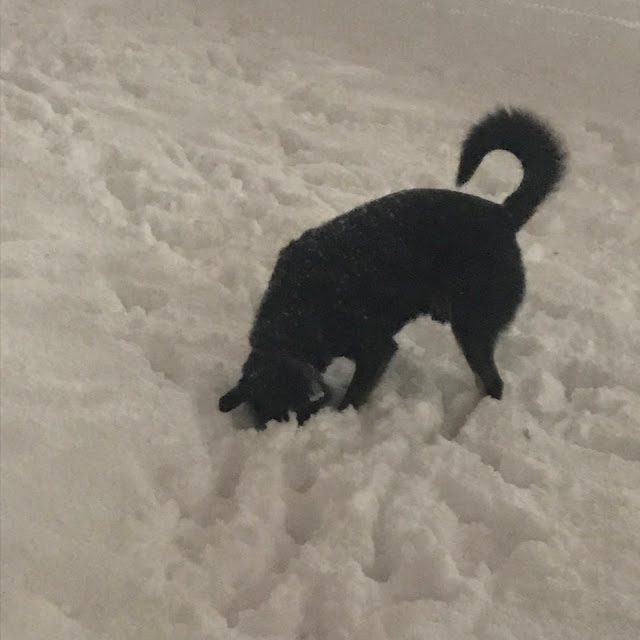 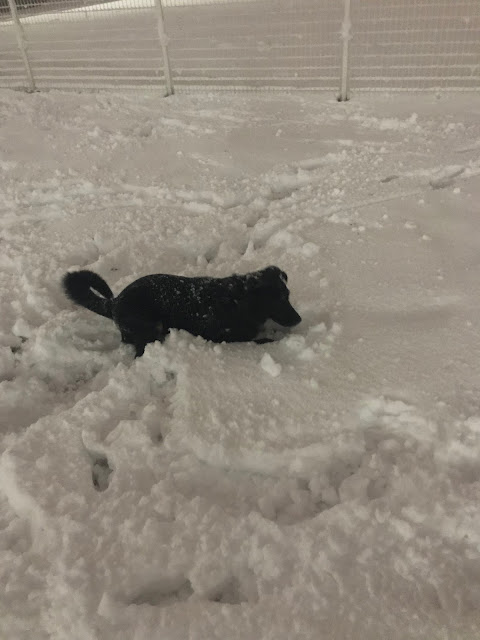 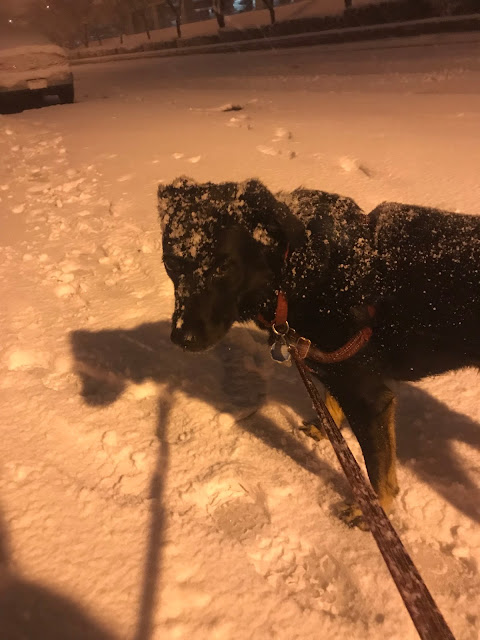 After we got home and I peeled off the wet layers,  Malcolm had dinner and I made myself some popcorn and mint truffle hot chocolate, with which I had my second ever Tim Tam slam (where have these been all my life!?). Just as I was feeling toasty and finishing my hot chocolate, Malcolm decided he needed to go out again for his final walk for the evening. Silly boy.

We haven't seen snow like this in almost two years, so while this is just daily life for many (and has been for us at times), it felt novel and amazing to me! It's still coming down at press time, but probably ending soon and the forecast high for tomorrow is 50 degrees, so this is probably it for a while again! 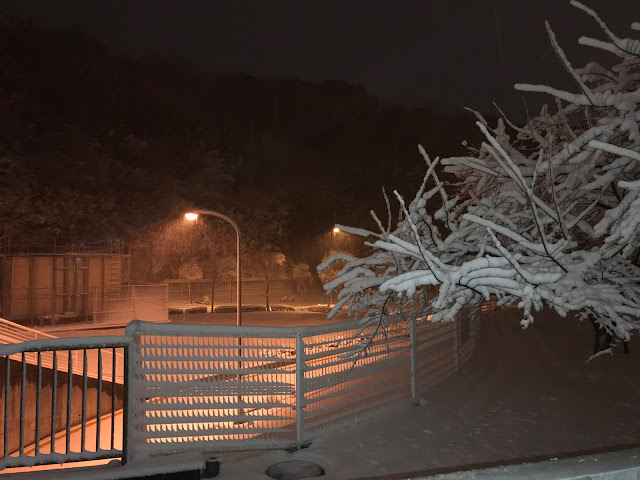 Posted by AmandaStretch at 10:34 PM

And you look so terribly frozen in that picture! But you make a cute snowman (in more than one way!). :)

Loving all your stories!