Man. What a rad weekend. The drive up Friday night was easy, hardly any traffic at all, and I made great time. I stayed with my fabulous friends CorryZahn. Saturday morning, we drove into the city. I attended a wonderful session at the Manhattan temple whilst they went a movie. I did lunch backwards, with dessert first. I visited Magnolia Bakery and had a cupcake that was almost too pretty to eat. 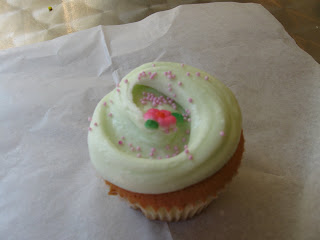 Then lunch proper was the recession special at Gray's Papaya, where I pretty much always go now if I'm in the neighborhood. 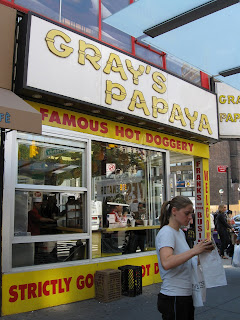 I met back up with the guys as well as our other friends, Ender and Mrs. Ender, to see a matinee preview of the new musical 13, by Jason Robert Brown. It was quite entertaining, lots of good one liners, and the music was excellent. Corry suggested that we were all a little older than the intended demographic, but we still enjoyed ourselves. It officially opens this coming weekend.

Sometime during the second act, I looked back and saw Mr. Brown sitting on the stairs to the balcony watching the show. After the performance, he was still standing in the back, so I dug up some courage and introduced myself. Inexplicably, my knees went weak. I was even more star struck than I thought I'd be. I thanked him for the show and he thanked me for coming. I mentioned that I'd entered his karaoke competition and he said "Yeah, that's a distant dream." I suppose that opening a new show on Broadway can be quite time consuming.

Since Ender had a meeting with his boss, CorryZahn and I headed back to Jersey to spend the evening barbecuing. SO tasty! The weather was gorgeous, and I miss having a back porch.

Sunday morning, I took the train into the city. First, I registered for my audition time. It was too late to make church at 11 and my audition would make a later meeting difficult, so I decided to check out Broadway Cares/Equity Fights AIDS Flea Market. I approached what I thought was the end of the market, at 44th and 8th, when I discovered the 8th Avenue Fall Festival, a huge open air market. I do love a good open air market. 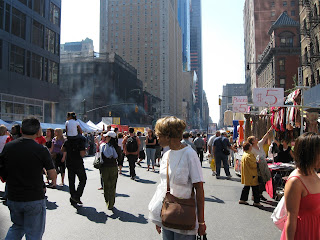 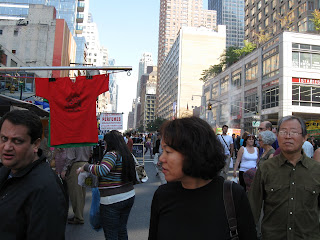 It also makes for good people watching, including this guy just standing and bumping his hip to the blaring reggaeton. He was there for at least an hour or more, that I'm aware of. 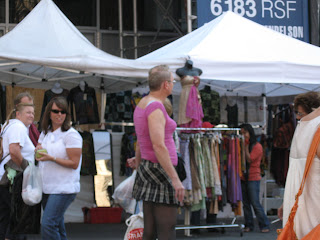 I walked up all twelve blocks of the market. And back. In my three inch heels. My feet STILL hurt.

Then, it was time.

Went well. I was singing "Who Will Love Me As I Am" for Side Show. I had a hard time remembering where to direct my focus and I forgot the words to my show off measures (where the notes go highest), so I just sang some words I'd already sung. I probably would have hit the notes better if I were more confident. Then, my accompanist continued past my big red STOP mark. Suddenly, I couldn't remember what happened next. How many measures of rest were there? What were the words? The NOTES? The RHYTHM!? I think I got the words and notes right, but I came in to early and made the rhythm my own. The accompanist followed nicely. The casting director was looking at me and smiling the whole time, and after my song, thanked me and said it was nice to meet me. So who knows? But the point is that I've now auditioned for Broadway, and that's good enough for me.

I continued to browse the expo and talked to someone I know from DC area theatre before attending a seminar on having acting success now. I learned a few things, I think. Then, with a black and white cookie to celebrate my success, it was back on the train back to Jersey. A quick clothing change and hugs, and I was on my way home. I did hit some traffic, but Fran kept me company for more than 90 minutes, and my dad checked on me a few times. I made it home around 1 AM.

I consider it a successful weekend. Successful in that I achieved my objective [to audition for a Broadway production company]. It was less successful in that I inadvertently introduced my archnemesis to the girl of my dreams and now he is taking her out on dates and they are probably going to French kiss. Or something.

Or something. That might not have been me.
Posted by AmandaStretch at 11:32 AM

P.S. SO totally cool that you met JRB!